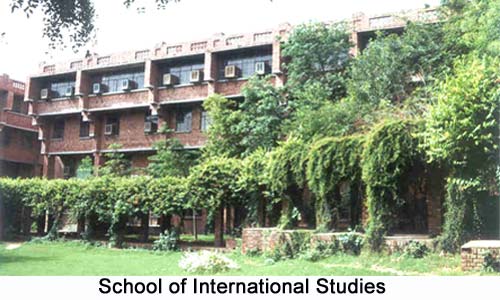 Established in 1955, the School of International Studies is the oldest school of the University. During the forty-six years of its existence, the School has established itself as one of the premier institutions in the country for the study of international relations and area studies.

The School has made pioneering contributions in promoting the study of international relations as an academic discipline in India and in advancing knowledge and understanding of international affairs in an inter-disciplinary perspective. The School is also the first institution in the country to promote "Area Studies" and to develop expertise on various counties and regions of the world. It has also acquired an international reputation as a center of advanced learning.

The need for an institution of this type was first felt in years immediately following Independence. The Indian Council of World Affairs, which was then the only institution in the country concerned with foreign affairs, realized that to promote study of international affairs in India effectively, it was important to train young men and women in interpreting current global developments in economic, social and political spheres. It was in pursuance of the recommendations of a committee headed by Pandit Hriday Nath Kunzru that the Indian School of International Studies was established in October 1955 with Dr. A. Appadorai as the first Director of the School.

For a long time, the academic programme of the School focused exclusively on research and the only degree it awarded was Ph.D. Soon after the School became a part of the Jawaharlal Nehru University, the M.Phil curriculum was introduced in 1971-72. In the following academic year 1973-74, the School started offering a 2 year MA (Politics: International Studies) programme. Much later in 1995-96, a new and unique M.A. programme in Economics (with specialisation on World Economy) was introduced by the Economics Division of the Centre for Studies in Diplomacy, International Law & Economics.

All these courses have attracted interest from young students all over the country and abroad. Year after year, the admission process has become fiercely competitive. For example, in 2001 for 69 seats in the MA (Politics) programme, as many as 1416 candidates appeared at the nationwide written test. For the MA (Economics) programme 748 candidates applied to compete for 20 seats in 2001. Likewise, in the same year a total of 901 applicants competed for 139 M.Phil/Ph.D seats in all the nineteen programmes of study in the School.

A large number of our M.Phil/Ph.D students qualify in the written tests for UGC fellowships. Moreover, almost every State Government has instituted a fellowship (in some cases more than one) to be awarded to students meeting the criteria of domicile status in the state concerned.As for the output of the School, it may be noted that, as of January 2002, 527 scholars have been awarded Ph.D and 1734 M.Phil degrees.

In the recent years, several Chairs have been instituted in the School. These are Appadorai Chair, Nelson Mandela Chair, State Bank of India Chair and Chairs in Environmental Law and Space Law. Members of the faculty of the School have contributed to the advancement and dissemination of knowledge in International Studies, not only through their teaching and research supervision but also by publishing books and journal articles of highest international repute.

The School faculty have also been invited as Consultants to various Government and non-Government Organisations for their specialised expertise and they have been participating in radio discussions and television programmes on subjects relating to international affairs.The School holds national and international seminars from time to time on important aspects of area studies, inter-country relations and on themes relating to the study of international relations as an academic discipline.

The School also holds a series of extension lectures every year on a theme relating to contemporary international relations. Pursuant to a decision of the Academic Council in February 1989, these lectures are now known as "Hriday Nath Kunzru Memorial (Extension) Lectures on International Relations". The theme of this Lecture series in 2000 was Regional Dynamics in International Relations.

Under an endowment funded by Asia Publishing House, Bombay, it holds lectures in memory of the great poet and patriot, Sarojini Naidu and invites a distinguished scholar or statesman to deliver the memorial lecture. For over two decades, at the request of the Ministry of External Affairs, Government of India, the School organized a training course for each batch of Indian Foreign Service probationers for a period ranging from three to four months and gave them the necessary orientation for their diplomatic career.

The School publishes a quarterly journal, International Studies. Founded in July 1959, this journal has acquired an international standing as the leading Indian academic journal in the field. It publishes original research articles on issues and problems, including problems of theory of contemporary relevance in the broad field of international relations and area studies.

Being a referred journal, it attracts contributions not only from the members of the School faculty and other Indian universities/ research institutions but also from scholars all over the world.

The School offers the following M.Phil./Ph.D. programmes of study:
i) American Studies

The profiles of the individual Centres which follow contain a detailed description of these M.Phil./ Ph.D programmes.

This programme is run by the Centre for International Trade & Development(CITD).

Also visit:
MATRIX : E-Journal of International Relations , published by scholars of the School